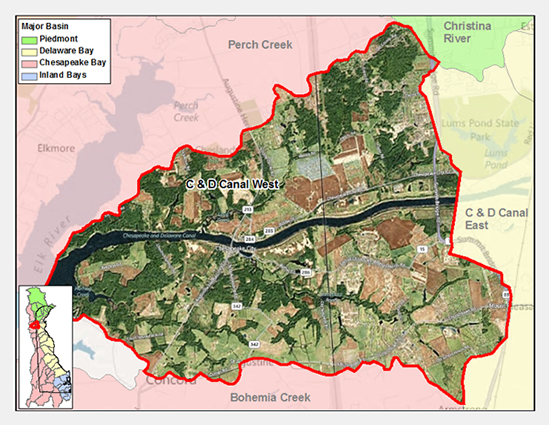 The Chesapeake and Delaware Canal West watershed is one of only three tidal watersheds in the Chesapeake Basin. Soil types include the Matapeake-Sassafras association described by the USDA-Natural Resources Conservation Service as "well-drained, medium-textured and moderately coarse textured soils on uplands". The C & D Canal West watershed has several notable waterways including Long Creek, Back Creek and Sammons Pond.

Land Uses
The federal government owns nearly 9,000 acres along the Chesapeake and Delaware Canal. The land along the Canal is used for recreation, agriculture, dredge disposal and habitat. Man-made embankments along the canal are the result of years of disposal activity and mantenance of canal depths. Through a series of agreements, the states of Delaware and Maryland manage approximately 7,500 acres of property for recreation and wildlife management.

The majority of the C & D Canal West Watershed is agricultural with a small amount of development.

Nutrients and Bacteria
Nutrients, physical habitat condition, and water supply are the main concerns in watershed.

Cultural Resources
The Chesapeake and Delaware Canal is listed on the National Register of Historic Places and is designated as a National Historic Civil Engineering and Mechanical Engineering landmark. The canal is unique as the only major commercial navigation waterway in the United States built during the early 1800s and still in use.

Recreational Opportunities
The U.S. Army Corps of Engineers maintains a Canal Museum at Chesapeake City which provides visitors with a glimpse of the canal's early days. The waterwheel and pumping engines remain in the original pumphouse, which is on display in the museum. These steam engines are the oldest of their type in America still on their original foundations. Other artifacts and exhibits in the museum detail and illustrate the canal's history.