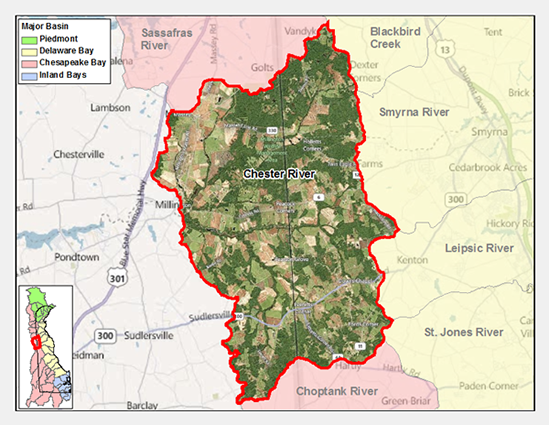 Land Uses
The land use within the watershed is dominated by agriculture, wetlands, and forests. Hartly, which lies on the southern border of the watershed, is the only incorporated town.

Wildlife and Fisheries
Ducks, geese, bald eagles, and other water-loving birds make their homes along the entire 60-mile course of the river from Delaware into Maryland. Hunters flock to the Chester in the fall because the river is on a major migration route for Canada geese. The waters of the Chester are spawning and nursery areas for many fish species, including alewife, shad, blueback, and perch. Striped bass is the most prized anadromous (freshwater spawning) fish found in the Chester. Known locally as "rockfish", the striped bass is very valuable commercially.

Wetlands
The Chester/ Choptank River Watershed received an overall wetland grade of B. Depression (B+), flat (B), and riverine (B) wetland types were assessed and graded (grade in parenthesis) in this watershed. The most common stressors to these wetlands were invasive plant species, selective forestry, microtopography alterations, ditching, mowing, and roads in the wetland, and development, channelized streams, agriculture, and roads in the lands surrounding the wetland (buffer). The complete reports for this assessment will become available in 2021 online, data is currently available.

Nutrients and Bacteria
Concerns in the watershed include low dissolved oxygen, nutrient over-enrichment, and high levels of bacteria. There are no active point sources discharging nutrients and bacteria into the Chester River, therefore, all pollutants are coming from nonpoint sources such as septic systems and animal operations.

The Delaware watersheds draining to the Eastern Shore of Maryland, including the Chester River, are required under the 2000 Chesapeake Bay Agreement to reduce nitrogen and phosphorus loads by 46.8% and 43.5% from levels that were present in 2000. Also, State of Delaware Total Maximum Daily Loads (TMDL) require 40% reductions in phosphorus and reductions of bacteria by 37%. Nitrogen is required by the TMDL to remain at 708 lbs per day.

Geology and Soils
The streams in the northern portion of the Chester River Watershed are marsh-like due to the surrounding wetlands, while to the south, they are ditch-like, due to the agricultural influence of the area.

On average, the stability of stream banks in the Chester River basin is fair to poor. As lands within the basin were developed for agriculture and later urbanized, many miles of stream banks became highly eroded. Since the streams in this basin flow into the Chesapeake, this bank instability causes an increase in downstream transport of nutrients and suspended sediments to the Bay. 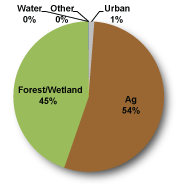