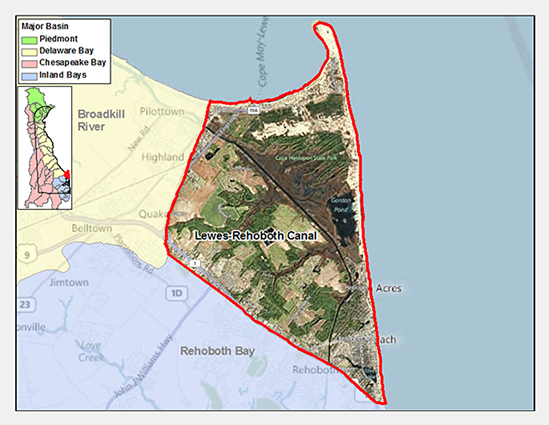 Background
Rehoboth Bay watershed makes up one of three of Delaware's Inland Bays. The Inland Bays consist of three interconnected bodies of water - Rehoboth Bay, Indian River Bay, and Little Assawoman Bay - all located in southeastern Sussex County that are further divided into subwatersheds . The subwatersheds of the Rehoboth Bay consists of the Lewes-Rehoboth Canal Watershed and the Rehoboth Bay Watershed. The Lewes-Rehoboth Canal is made up of about 45,000 acres in eastern Sussex County. The canal, which is about 10 miles long, connects the Delaware and Rehoboth Bays. The total stream length is 14.1 miles and the mainstream length is 9.2 miles. Net flow in the canal is believed to be toward Rehoboth Bay. Most surface waters in this watershed are tidal in nature; freshwater streams are very sluggish.

Land Uses
The principal land uses in the basin include agriculture in upland areas, residential (including the town of Lewes) and commercial development near the water and at either end of the canal, and wetlands at water's edge.

Contaminants
The Lewes-Rehoboth Canal Watershed has five sites listed in the Site Investigation and Restoration Section database. Three sites are state-fund lead (HSCA) sites, one site is in the Voluntary Cleanup Program (VCP) and one site is listed as a Formerly Used Defense Sites (FUDS).

Each of the sites is sampled through the program listed above for a consistent suite of environmental contaminants. These contaminants are broadly classified as Volatile Organic Compounds (VOCs), Semi-Volatile Organic Compounds (SVOCs), Pesticides, Polychlorinated Biphenyls (PCBs) and Metals as listed using USEPA and DNREC defined standards. When sites are adjacent to water bodies sediment samples are collected to assess potential impact from a site on the health of the waters.

If you would like to view reports for any of the sites in the SIRS program please follow the link the DNREC Environmental Navigator to search by map for the Lewes-Rehoboth Canal Watershed.

Cultural Resources
The inscription on the Lewes-Rehoboth Canal states, "The Lewes-Rehoboth Canal connecting Rehoboth Bay and Delaware Bay was authorized by the U.S. River and Harbor Act of 1912. Initially, the canal was envisioned as a means of access to the sea for farmers and saw mills along the Indian River and Bay. Consent to aquire land for construction was granted to the U.S. government by the Delaware state legislature in 1913. Construction by the U.S. Army Corps of Engineers was completed in 1927. Today, this feeder route to the Inter-coastal Waterway is used by commercial and pleasure boats and provides access for pilot boats to guide ocean-going vessels up the Delaware Bay to the major ports of Wilmington and Philadelphia."

A Brief History of the Lewes-Rehoboth Canal 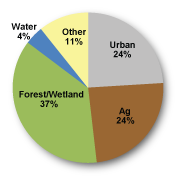