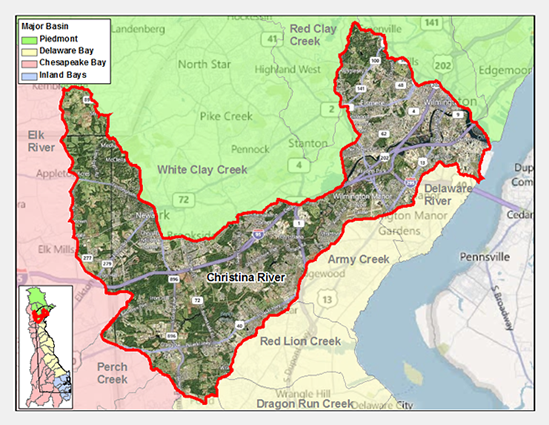 Land Uses
The Christina River is the most urbanized watershed in the Christina Basin with 59% urban/suburban followed by forest/wetland (25%) and agriculture (15%) uses. Collectively the White Clay, Red Clay, Brandywine and upper Christina are used to supply drinking water to more than 50% of New Castle County's population. United Water Delaware (UWD) operates the Christiana Water Treatment Plant. It provides drinking water to the UWD southern service area that extends from I-95 south to the Chesapeake and Delaware Canal. This water treatment plant draws water from Smalleys Pond, storage volume 40 million gallons, and is allocated to withdraw and treat 6 million gallons per day (mgd). The water is distributed to residential, commercial, and industrial customers within a service area that stretches from the Pennsylvania state line in northeast New Castle County to the northern edge of the Chesapeake & Delaware canal.

The watershed is the site of the Port of Wilmington, an important shipping link, and one of the largest importers of orange juice, Chilean grapes, bananas, and automobiles nationally.

Wildlife and Fisheries
The tidal waters of the Christina River support a striped bass fishery and spawning grounds.

Wetlands
The Christina watershed is located in New Castle County, Delaware, and extends north and west into Maryland and Pennsylvania. In Delaware, this watershed includes the cities and towns of Newark, Christiana, Newport, and Wilmington. Approximately 46% of the wetlands in the watershed have been filled or otherwise lost since the early 1700s. As populations grew and heavy industries expanded, many wetlands in the eastern half of the watershed were diked, drained, or filled to allow for this development.

Wetlands in this watershed were found to have an overall health grade of D. Although highly impacted, these wetlands are able to provide some natural benefits, but at a reduced rate, such as flood storage, water purification, and educational opportunities.

Tidal (F), flat (C), and riverine (F) wetland types were assessed and graded (grade in parenthesis) in this watershed. The most common stressors to these wetlands were invasive plant species, diking, dredge soil piles, and point source discharge in the wetland, and development, impervious surfaces, and large mowed areas in the lands surrounding the wetland (buffer). The complete reports and data for this assessment are available online.

Nutrients and Bacteria
The nutrient and bacteria TMDLs for the Delaware portion of the Christina River requires varied reductions based on the stream segment of between 0-62% reduction in nitrogen, between 0-77% reduction in phosphorus and between 29-95% reduction in bacteria.

In water bodies of the Christina River Watershed, samples have indicated that PCBs, dieldrin and chlordane are present in the environment at levels requiring further attention under the Clean Water Act (1972). The Christina River Watershed is on the 303d list of impaired waters as well as having State of Delaware Fish Consumption Advisories for PCBs, dieldrin and chlordane.

If you would like to view reports for any of the sites in the SIRS program please follow the link the DNREC Environmental Navigator to search by map for the Christina River Watershed.

Geology and Soils
The Christina River watershed lies primarily within the Atlantic Coastal Plain, which consists of an unconsolidated mass of caustic sediments that increases in thickness south of the geologic Fall Line. 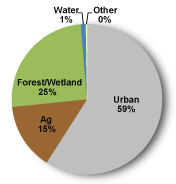