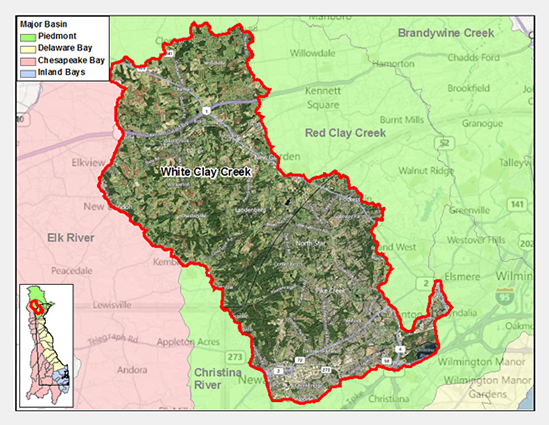 Land Uses
Collectively the White Clay, Red Clay, Brandywine and upper Christina are used to supply drinking water to more than 50% of New Castle County's population. The surface water of the White Clay Creek and the aquifers in the watershed provide over 120,000 residents with drinking water. The Creek serves as a major drinking water source for much of northern Delaware, accounting for 33 million gallons per day (mgd) of the overall production of water supply from the watershed. Delaware and Pennsylvania residents in the White Clay Creek watershed also receive a significant amount of their water supply from groundwater resources in the watershed. The City of Newark's groundwater supplies provide up to 1.8 mgd from five wells in the watershed. The Artesian Water Company operates six wells that provide up to 1.9 mgd in the Cockeysville Marble Formation near Hockessin, Delaware. The Pennsylvania portion of the watershed is largely rural with a few small towns and villages, such as West Grove and Avondale, and some suburban clusters. The Delaware portion of the watershed includes the City of Newark and is highly suburbanized, although several very large tracts of public open space remain intact and flank the river.

Wildlife and Fisheries
The watershed is home to a wide variety of fish and wildlife. Its waters support over 24 species of fish. The creek is stocked annually by both Delaware and Pennsylvania and is considered Delaware's premier trout-fishing stream. Surveys estimate that 93 species of birds nest in the watershed. Thirty-three species of small mammals have been documented in the watershed. Twenty-seven species of amphibians and reptiles live in the watershed, among them the rare bog (muhlenbergs) turtle.

If you would like to view reports for any of the sites in the SIRS program please follow the link the DNREC Environmental Navigator to search by map for the White Clay Creek Watershed.

Geology and Soils
The watershed is perched along the geologically unique Fall Line. The Fall Line runs through a line stretched between Newark and Wilmington and separates the hilly, rocky, Piedmont from the flat, sandy Coastal Plain Provinces. This transition zone results in a wider array of flora and fauna and enhances the opportunities for nearby researchers. 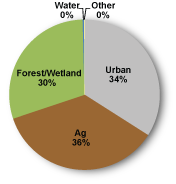