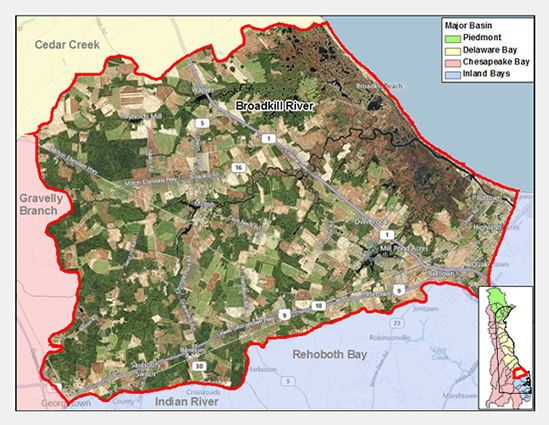 Background
The Broadkill River watershed is located in the east central portion of Sussex County. It is bounded on the north by the Cedar Creek watershed, on the west by the Gravelly Branch and Deep Creek watersheds, on the south by the Lewes-Rehoboth Canal, Rehoboth Bay, and Indian River watersheds, and on the east by the Delaware Bay. The mainstem of the Broadkill River is approximately 25 miles long. The major watercourse in this segment is the Broadkill River which originates at the Town of Milton and discharges into the Roosevelt Inlet near Lewes. Major impoundments in the area are Waggamons Pond and Diamond Pond located near Milton. The Broadkill River flows generally eastward until it approaches the coast where it turns abruptly and flows south to discharge into the Roosevelt Inlet. The flow of this stream is sluggish and the water is turbid. The watershed drains an area of 107 square miles.

Land Uses
There is only one small incorporated community, the Town of Milton, within the watershed. The primary land uses in the area are agriculture and wildlife refuge.

Wildlife and Fisheries
The tidal marshes along the coast are part of a Prime Hook National Wildlife Refuge. Prime Hook National Wildlife Refuge is located on the west shore of Delaware Bay, about 22 miles southeast of Dover, and 64 miles southeast of Wilmington, Delaware. The refuge has one of the best thriving wetland habitat areas along the Atlantic Coast. These habitats have become important rest points for spring and fall migrating shorebirds and wading birds. Endangered and threatened species management activities provide habitat for the Delmarva fox squirrel, nesting bald eagles, and migrating peregrine falcons. Neotropical land birds passing through utilize the refuge's upland forested habitat during the fall and spring. The refuge's 10,000 acres are a diverse landscape featuring freshwater and salt marshes, woodlands, grasslands, scrub-brush habitats, ponds, bottomland forested areas, a 7-mile long creek, and agricultural lands. These cover types provide habitat for approximately 296 species of birds, 38 species of reptiles and amphibians and 37 different mammals. Public use at Prime Hook provides compatible wildlife-oriented recreational opportunities. Since the signing of the National Wildlife Refuge System Improvement Act of 1997, appropriate public uses of the Refuge System include six major wildlife-dependent recreational uses and are: hunting, fishing, wildlife observation, photography, environmental education, and environmental interpretation.

Wetlands
Located in Sussex County, Delaware, the Broadkill watershed encompasses 68,500 acres within the Delaware Bay and Estuary Basin and is primarily comprised of agricultural land with urban development and a wildlife refuge. The Broadkill River headwaters originate near the Town of Milton and flow 25 miles eastward towards Broadkill Beach where it outlets to the Delaware Bay through the Roosevelt Inlet.

Tidal (C), flat (B-), and riverine (B-) wetland types were assessed and graded (grade in parenthesis) in this watershed. The most common stressors to these wetlands were invasive plant species, forestry activity, excavation, filling, and ditching of the wetland, and development, agriculture, and roads in the lands surrounding the wetland (buffer). The complete reports and data for this assessment are available online.

Contaminants
The Broadkill River Watershed has a total of thirty-five sites listed in the Site Investigation and Restoration Section database. There are seventeen that are state-fund lead (HSCA) sites, eight Brownfield program sites, six sites that are in the Voluntary Cleanup Program (VCP), three sites that have undergone a preliminary assessment / site inspection (PA/SI) and one site listed as a Formerly Used Defense Sites (FUDS).

If you would like to view reports for any of the sites in the SIRS program please follow the link the DNREC Environmental Navigator to search by map for the Broadkill River Watershed.

Recreational Opportunities
The Broadkill River Canoe Trail links the Town of Milton to the Edward H. McCabe Preserve, just three miles to the east. Canoes are available to rent at Wilson's Sunshine Marina, and paddlers can put in at Memorial Park.

Flora and Forest Communities
Significant areas of Atlantic white cedar are found in only 6 watersheds in the state, one of which is the Broadkill. 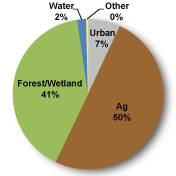